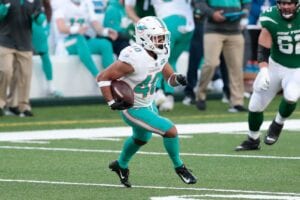 Needham, 24, originally signed on with the Dolphins as an undrafted free agent out of UTEP back in 2019. He was among Miami’s final roster cuts coming out of the preseason and signed to their practice squad once passing through waivers unclaimed.

Needham was promoted from the practice squad to the active roster later in the season.

In 2020, Needham appeared in all 16 games for the Dolphins and recorded 58 total tackles, one sack, two interceptions and seven pass defenses.