Adam Schefter reports the Miami Dolphins are signing RB Duke Johnson to their active roster from their practice squad. 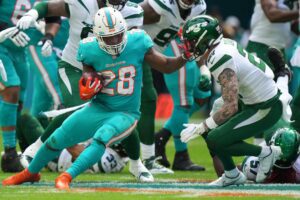 Johnson is coming off a two-touchdown performance for Miami vs. New York on Sunday.

Cleveland traded him to the Texans in August of 2019 in exchange for a conditional 2020 third-round pick.

Johnson was set to make a base salary of $4.65 million in the final year of his agreement when the Texans cut him earlier this year. The Jaguars signed him to their practice squad earlier this season but released him shortly after.

He caught on with the Dolphins’ practice squad during in October.

In 2021, Johnson has played in two games for Miami, recording 26 rushes for 125 yards and two touchdowns with one catch for 20 yards.