Adam Schefter reports that the Dolphins are signing LB Jerome Baker to a three-year contract extension worth $39 million extension that includes $28.4 million guaranteed. 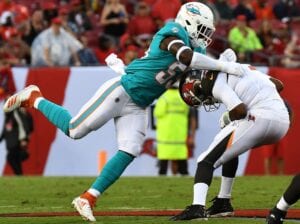 Baker said recently that he wanted to sign a long-term contract with the team.

“I want to play here for the rest of my career. I love it here,” Baker said, via NFL.com. “I love the fans. I love the organization. I love everybody here. Yeah, I definitely see myself playing here for a long time.”

Dolphins HC Brian Flores explained how important Baker is to the team.

“Jerome has made a lot of improvements and has gotten better in really all areas,” Flores said. “I think he’s tough, he’s smart, he’s competitive, he loves to play, he’s team-first. He’s really gotten better in every area – pass coverage, run defense, really across the board. He’s a very good player. We’re excited about working with him and he’s a team guy. I think that’s the thing I liked most about him is he’s a team player. He wants to win and we’re excited to have him.”

In 2020, Baker appeared in all 16 games for the Dolphins and recorded 112 tackles, seven sacks, two forced fumbles and three passes defended.