Mike Klis reports that the Eagles have claimed CB Mac McCain off of waivers from the Broncos on Wednesday.

McCain, 23, signed with the Broncos as an undrafted free agent out of North Carolina A&T following the 2021 NFL Draft. He signed a standard three-year, $2.4 million deal but was waived coming out of the preseason.

Denver had re-signed McCain to their practice squad but the Eagles signed him to their active roster shortly after. 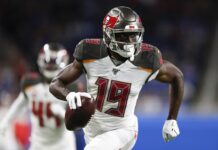