Mike Florio of Pro Football Talk, citing multiple sources with knowledge of the situation, reports that the Eagles fear RB Miles Sanders suffered a broken hand during Sunday’s win over the Giants. 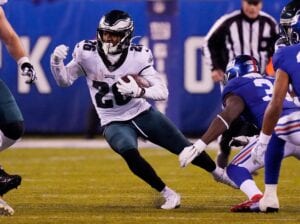 The plan is for Sanders to undergo more tests on Monday, but if a fracture is confirmed, he would miss a few weeks.

The Eagles are still trying to secure a playoff spot, so it’s likely he would be out for the regular season if tests are confirmed.

Sanders, 24, is a former second-round pick by the Eagles in the 2019 NFL Draft out of Penn State. He’s in the third year of his four-year, $5.35 million rookie contract.