The Philadelphia Eagles announced three roster moves on Saturday, including signing K Matthew McCrane to their practice squad. The team also announced that they are cutting LS Luke Juriga and team placing LB Shaun Bradley on the COVID-19/Reserve list. 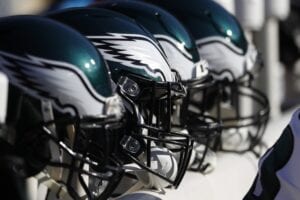 McCrane, 27, wound up signing on with the Cardinals as an undrafted free agent out of Kansas State. He signed a three-year, $1.71 million contract with the Cardinals and was set to make a base salary of $485,000 for the 2018 season when he was waived coming out of the preseason.

After being released by Pittsburgh, McCrane had a brief stint in the XFL with the New York Guardians. He spent the 2020 season on the Browns practice squad as the backup and emergency kicker.

The Browns signed McCrane to a futures contract for the 2021 season but ended up cutting him in May.

In 2018, McCrane appeared in five games for the Raiders, Cardinals, and Steelers. He made 8 of his 12 field goal attempts (66.7 percent) and converted all nine of his extra-point attempts.