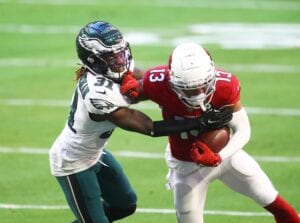 Robey-Coleman, 28, wound up signing on with the Bills as an undrafted free agent out of USC back in 2013. He managed to make the 53-man roster during his rookie season and received a two-year extension in 2015.

However, the Bills cut him loose in 2017 and he later signed a one-year contract with the Rams. From there, Robey-Coleman agreed to a three-year contract worth more than $15.75 million.

The Eagles brought Robey-Coleman back on a one-year contract last year.

In 2020, Robey-Coleman has appeared in 15 games for the Eagles and recorded 44 tackles, no interceptions, a forced fumble, a recovery and pass defense.