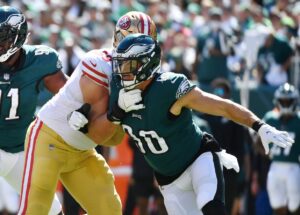 Kerrigan, 33, is a former first-round pick by Washington out of Purdue back in 2011. He played out his rookie contract before agreeing to a five-year, $57.5 million extension back in 2015.

In 2021, Kerrigan has appeared in 14 games for the Eagles and recorded three tackles and no sacks.