After the Philadelphia Eagles chose to trade Donovan McNabb to the Washington Redskins, it seemed inevitable that there would be a quarterback controversy in Philadelphia at some point. It only took one game for the calls for Michael Vick to start to begin.

Eagles quarterback, Kevin Kolb, was knocked out of the yesterday’s game against the Green Bay Packers after Clay Mathews brought him down from behind. Kolb suffered a concussion on the play was unable to return to the field.
Vick was brought in during the second quarter while the team was down by 17 points. Vick lead the Eagles back within seven points of the Packers and was finally stopped on a fourth and one that wound up being the teams final play.

Throughout the game Vick showed signs that he’s still as explosive of a player as he was for Atlanta prior to his sentencing. The fact that he was able to ignite a struggling offense and bring the Eagles back in a game that seemed over by the third quarter, is grounds for some debate over who is the better option for the team.

Andy Reid stated that the team will stick with Kolb as the starter as long as he’s healthy.

When asked if he thought that he had regained his ability to play up to his previous form, Vick said, “I still feel like I can play at a high level. I feel like if I had been out there for four quarters, maybe we would have had a chance to win the game.”

You can be sure that Eagles fans are wondering the same the same thing today. 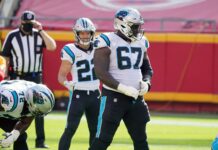