According to Tom Pelissero, Eagles S K’Von Wallace is expected to miss three to six weeks after partially separating his shoulder on Monday night against the Cowboys. 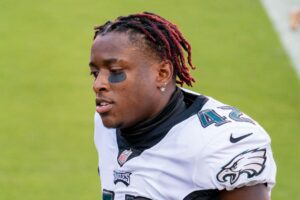 Wallace, 24, was a three-year starter at Clemson and earned third-team All-ACC honors. The Eagles selected him with the No. 127 pick in the fourth round of the 2020 NFL Draft.

In 2021, Wallace has appeared in three games for the Eagles and recorded six total tackles.