According to Jason Butt, the Falcons have activated CB Darqueze Dennard from the injured reserve list and promoted LB Edmond Robinson and DE Pita Taumoepenu off their practice squad. 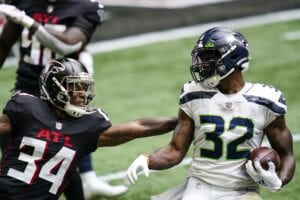 Dennard has been out since hurting his hamstring in Week 3. The Falcons designated him as a player to return earlier this week.

Dennard, 28, was taken with the No. 24 overall pick by the Bengals back in 2014. He played out the final year of his four-year, $7.978 million contract before the Bengals picked up his fifth-year option for the 2018 season.

Dennard made $8,526,000 million in 2018 before returning to the Bengals on a one year, $4.5 million contract last year. After a deal with the Jaguars fell through, Dennard signed a one-year deal with the Falcons this offseason.

In 2020, Dennard has appeared in three games for the Falcons and recorded 16 total tackles, one interception, and three pass defenses.