According to Michael Rothstein, the Falcons have designated OL Elijah Wilkinson to return from injured reserve following a knee injury. 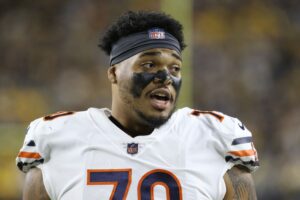 Wilkinson, 27, wound up going undrafted out of Massachusetts back in 2017. He later signed on with the Broncos, but was waived coming out of the preseason and later re-signed to their practice squad.

Wilkinson played under exclusive rights tenders for two seasons before returning to the Broncos on a one-year, restricted tender worth $3.27 million for the 2020 season. The Bears signed him to a contract last March and he subsequently caught on with the Falcons this offseason.

In 2022, Wilkinson has appeared in and started seven games for the Falcons at tackle.