According to Adam Schefter, the Falcons are releasing veteran S Ricardo Allen and DE Allen Bailey. 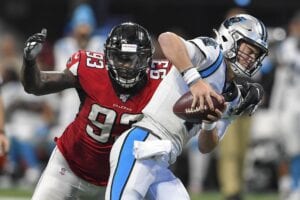 This doesn’t come as a big surprise, as both players were frequently speculated as potential cap cuts this offseason as the Falcons try to free up space to get under the reduced cap.

The Falcons officially confirmed the news and announced they have also waived QB Kurt Benkert.

The #Falcons made three roster moves on Thursday:

The Falcons and Allen later agreed to a three-year, $19.5 million extension in 2018.

In 2020, Allen appeared in 12 games for the Falcons and recorded 25 tackles, two interceptions and five pass defenses.

Bailey, 31, is a former third-round pick of the Chiefs back in 2011. He played out the final year of his five-year, $25.67 million contract before signing a two-year, $10.5 million deal with the Falcons in 2019. He signed a renegotiated contract that included a one-year, $4.5 million extension through 2021.