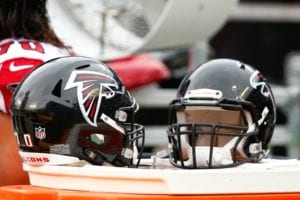 Fowler, 30, signed on with the Broncos as an undrafted free agent out of Michigan State in 2014. He was unable to make the 53-man roster during his rookie season, but was later re-signed to their practice squad and returned to Denver on a future/reserve contract.

The Broncos brought Fowler back on one-year exclusive rights deals the next two years but declined to tender him a contract as a restricted free agent in 2018. He had brief stints with the Bears, Patriots, Giants and Saints before signing on with the 49ers.

In 2020, Fowler appeared in five games for the Saints and caught two passes for 11 yards receiving.

Tate, 22, was one of the most college dynamic players in the country during his time at Arizona. The Eagles later signed him to a contract after going undrafted in 2019.

Philadelphia waived Tate last year before signing him to a futures contract this past January. He was, unfortunately, cut loose shortly after this year’s draft.