According to Mike Florio, former Broncos OT Ja’Wuan James has filed a grievance against the team. 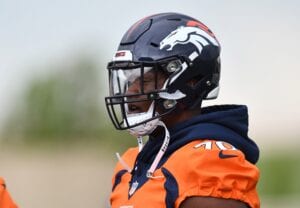 After James tore his Achilles working out away from the team facility as a part of the NFLPA’s campaign against OTAs, he was released by the Broncos with a non-football injury designation.

That voided the remaining guarantees on the deal James signed as a free agent with the team in 2019, which would have been $15 million in total.

However, James is arguing his injury should qualify as a football injury.

James also claims the Broncos’ facility was not compliant with state COVID-19 protocols and that the NFI designation is being abused in his case.

“The purported historical purpose of an NFI designation is for protection against reckless and improper off-field player conduct. The intent was and is not to retaliate against veteran players (or any player) like Claimant during a global pandemic who are injured in the course and scope of employment when training for their Club and/or with the guidance and/or knowledge from the Club. A disturbing and dangerous precedent would be set by embracing such an interpretation that completely disregards player safety and basic dignity,” the grievance says.

Until the grievance is resolved, 40 percent of the contested amount, which comes out to $6 million, will come off of the Broncos’ cap.

We’ll have more on James as the news is available.