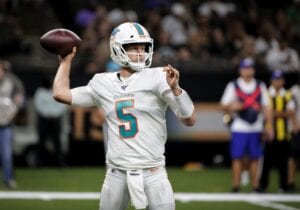 Rudock, 28, is a former sixth-round pick by the Lions back in 2016. Detroit elected to waive him as they trimmed down to the 53-man limit at the start of the 2016 season and they signed him to their practice squad after clearing waivers.

Rudock managed to make the 53-man roster in 2017 and returned to the Lions on an exclusive rights free agent the following year. From there, he joined the Dolphins on a futures contract and was eventually signed to their practice squad at the start of the season.

Miami brought Rudock back on a futures contract this past January and he’s been on and off of their roster since.

For his career, Rudock appeared in three games for the Lions in 2017 and completed three of five pass attempts for 24 yards and an interception.