Aaron Wilson of the Houston Chronicle reports that former Seahawks DT Malik McDowell has been medically cleared by several neurologists, including Steelers team doctor David Okonkwo, to resume his career.

“Malik has been cleared by several doctors and is doing everything he needs to do on and off the field,” William Farah tells Wilson. “Malik is in great shape. He’s back up to 295 pounds and he’s feeling really good. He’s been forced to do a lot growing and maturing these past few years.”

McDowell was involved in a serious ATV accident back in 2017 and suffered a serious concussion and facial injuries.

“I think teams will find he’s a much different person than he was coming out of college. He’s far more mature. He’s been extremely humbled and he has rededicated himself to his craft,” Farah added.

McDowell worked out for the Dolphins last year and had a tryout with the Cowboys before that.

McDowell, 24, was selected with the No. 35 overall pick by the Seahawks in 2017 NFL Draft. He signed a four-year, $6.95 million rookie contract that included $4.91 million guaranteed.

Seattle waived him with a non-football injury designation in July of 2018 and was officially cut loose in 2019.

During his three-year college career at Michigan State, McDowell recorded 88 total tackles, 24.5 tackles for loss, 7.5 sacks, one interception, two forced fumbles, and scored one defensive touchdown in 32 games with the Spartans. 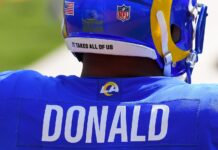