Adam Beasley of PFN reports that veteran OT Russell Okung has yet to receive a “satisfactory offer” from an NFL, which explains why he’s still a free agent at this point in the offseason. 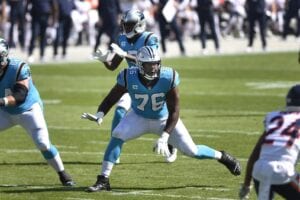 Beasley hears that Okung is being “super patient” and looking for the “right opportunity” for him this season. According to Beasley, it doesn’t sound like Okung is willing to play in 2021 on a “below-market deal.”

It’s possible he could wait things out and see if an opportunity surfaces with a contending team during training camp.

Okung dealt with a calf injury last year that limited him to playing in seven games for the Panthers.

Okung, 32, is a former first-round pick of the Seahawks back in 2010. After six years in Seattle, Okung signed a one-year, $5 million contract that included a team option with the Broncos in 2016.

Okung later signed a four-year, $53 million contract with the Chargers that included $25 million guaranteed. However, he was later traded to the Panthers for Trai Turner before the start of the season.

In 2020, Okung was limited to appearing in seven games for the Panthers and making seven starts for them at left tackle.

Three Other Teams Were Interested In Signing WR Cole Beasley