Tania Ganguli of the Florida Times Union writes that “a few sources” have informed her that the Jaguars could be targeting Georgia Tech WR Stephen Hill.

Ganguli concedes that Hill is probably a late first, early second-round pick, so the Jaguars would have to either down pretty far, or hope he falls to them at #38.

Yesterday, we posted an article that mentioned that the 49ers could end up targeting Hill at #30, if some of the offensive line prospects that they’re reportedly interested in aren’t available.

Jacksonville would be wise to find another receiver to go with newly acquired players like Laurent Robinson and Lee Evans. 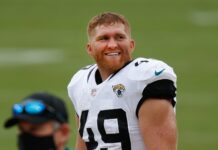