The New York Giants announced a series of roster moves on Monday including activating LT Andrew Thomas from injured reserve. 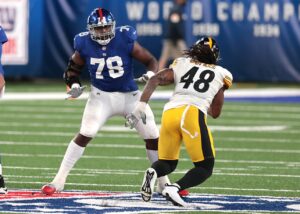 The contract includes a fifth-year option for the Giants to pick up for the 2024 season.

In 2021, Thomas has appeared in five games for the Giants, making five starts for them at left tackle.