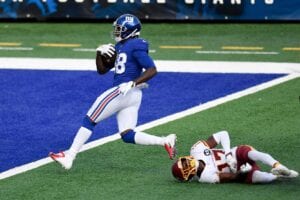 In 2020, Crowder has appeared in five games for the Giants and recorded 17 tackles, no sacks, a fumble recovery, a defensive touchdown and a pass defense.

During his college career at Georgia, Crowder recorded 122 tackles, 10 tackles for a loss, 1.5 sacks, a forced fumble, two recoveries, a defensive touchdown, and five passes defended over the course of three seasons and 32 games.