According to Pat Leonard, the Giants are firing OC Jason Garrett. 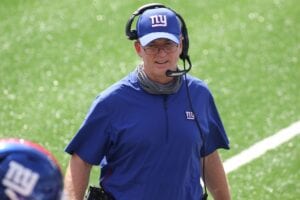 The team just lost in a debacle of an offensive performance on Monday night to the Buccaneers, 30-10, and Garrett has been under fire all season for his performance.

Giants HC Joe Judge‘s comments after the loss made it clear he was considering a change and he pulled the trigger today. Per Ryan Dunleavy, senior offensive assistant Freddie Kitchens is expected to take over as the play-caller.

Garrett, 55, began his NFL coaching career with the Dolphins back in 2005 as their quarterbacks coach. After two years in Miami, the Cowboys hired him as their offensive coordinator and he eventually worked his way up to head coach.

The Cowboys allowed Garrett’s contract to expire at the end of the 2019 season as opposed to firing him and he joined the Giants as their offensive coordinator.