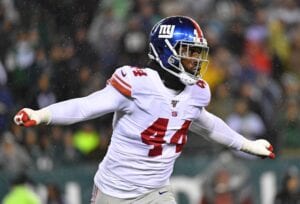 Rapoport says the deal is worth about $5.1 million, with a $4.125 million base salary as a 110 percent increase from his deal last year and a $1 million incentive.

After notching double-digit sacks on a prove-it deal, Golden’s market never materialized like he hoped this offseason, so he’s back for a second season in New York.

In 2019, Golden appeared in all 16 games for the Giants and recorded 72 total tackles, 10 sacks, one fumble recovery returned for a touchdown and no pass defenses. Pro Football Focus has him rated as the No. 84 edge rusher out of 108 qualifying players.