According to Ian Rapoport, the Giants are placing CB James Bradberry on the COVID-19 list. 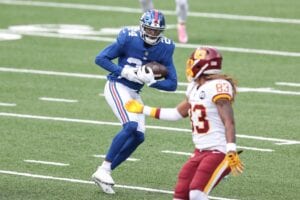 Mike Garafolo reports Bradberry is a high-risk contact, which will knock him out for at least five days and thus Sunday’s game against the Browns.

However, Garafolo adds Bradberry’s contact is unrelated to Giants OC Jason Garrett, who tested positive and was placed on the list today.

It’s a huge loss for the Giants, as not only was Bradberry playing at a high level, they have just one other healthy corner on the active roster.

Bradberry, 27, is a former second-round pick of the Panthers back in 2016. He played out his four-year, $3.96 million rookie contract in Carolina and was allowed to leave in free agency.

Bradberry signed with the Giants in 2020 on a three-year, $45 million deal.

In 2020, Bradberry has appeared in 13 games for the Giants and recorded 47 tackles, two forced fumbles, one recovery, three interceptions and 17 pass defenses. Pro Football Focus has him rated as the No. 6 cornerback out of 126 qualifying players.

Giants GM Dave Gettleman Unlikely To Be Back Next Year