Giants RB David Wilson announced Monday morning that he has been “cleared for everything.”

Just got cleared ….. #cleared for everything now the story continues #pocketrocket http://t.co/thjqbeLtfy

Wilson met with doctors on Monday to evaluate his neck, but signs suggested that he was likely to receive clearance, so this news isn’t a huge surprise.

Jordan Raanan of NJ.com points out that Giants HC Tom Coughlin previously mentioned that they are unlikely to use Wilson as a returner this season, and he will instead focus on playing running back for them.

Wilson, 22, was a first-round pick of the Giants back in 2012. He has struggled with ball security at times, which led to him being benched, but there is no question that has impressive ability when healthy. 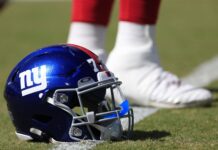