According to Jordan Ranaan, Giants RB Saquon Barkley is expected to play in Sunday’s game vs. Denver. 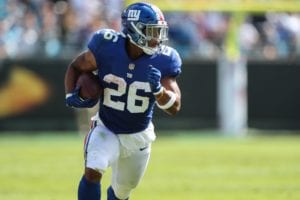 Ryan Dunleavy confirms the news adds that the Giants are not planning to have a pitch count for Barkley tomorrow. However, he says to not expect Barkley to get his pre-injury count of 80 snaps tomorrow.

Barkley missed all most all of last season due to a torn ACL. The Giants were cautious with him throughout the summer and preseason.

In 2020, Barkley was limited to two games with a knee injury, tallying 34 yards on 19 carries and no touchdowns. He also accrued 60 yards on six total catches.