The New York Giants are signing QB Mike Glennon to a contract on Thursday, according to Brandan Bishop. 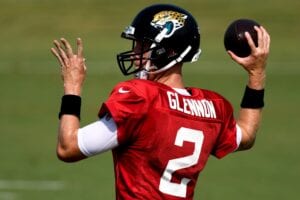 Glennon figures to replace Colt McCoy as the primary backup to Giants starter Daniel Jones in 2021.

Glennon, 31, is a former third-round pick of the Buccaneers back in 2013. He played out the final year of his four-year, $3.104 million rookie contract before signing a three-year, $45 million contract with the Bears in 2017.

The Jaguars signed Glennon on a one-year deal in 2020. He was released and added to the practice squad before returning to the active roster.

In 2020, Glennon appeared in five games for the Jaguars and completed 62 percent of his passes for 1,072 yards, seven touchdowns and five interceptions.