Heading into the 2010 season Ryan Grant was a legitimate featured running back but that all changed during the first game of the season when Grant went down with an ankle injury that he suffered during the first week of the season. Now there has been some speculation that his starting job could be in jeopardy with the rise of James Starks during the teams Super Bowl run.

“From what I’ve heard, that’s the conversation that was told to me,” Grant told WSSP radio, via SportsRadioInterviews.com.  “I was told that by [former running backs coach Edgar Bennett], initially. Jerry [Fontenot, the new position coach] didn’t tell me that anything changed.  Jerry told me that as of right now I’m still the leader of the backfield and the expectations won’t change. . . .  I do believe there will be competition, which is fine.  I’m all for that.”

Grant is due a $1 million roster bonus so an open competition will most likely be held to determine who will be starting come week 1. It’s also worth noting that Grant’s 2011 season will be another $3.5 million so if he struggles upon returning there’s a chance the Packers could cut him and save the money but from all indications they plan on giving him a legitimate shot of proving himself. 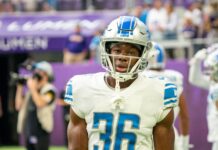