Ian Rapoport of NFL Media says he expects the Jaguars to at least explore the possibility of trading QB Gardner Minshew during the draft. 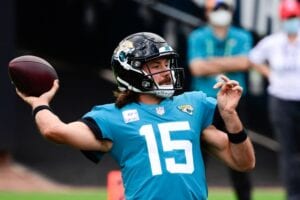 The Jaguars are expected to take Trevor Lawrence with the No. 1 pick tonight and they signed QB C.J. Beathard in free agency this offseason, which has led to speculation about Minshew’s future in Jacksonville.

It remains to be seen who may have interest in Minshew, but it seems like a deal would probably have to wait until day three of the draft if something were to get done.

In 2020, Minshew appeared in nine games for the Jaguars and completed 66.1 percent of his passes for 2,259 yards, 16 touchdowns and five interceptions. He has also rushed for 153 yards and a touchdown.

We’ll have more on a potential Minshew trade as the news is available.