Jonathan Jones of CBS Sports reports that the Jaguars had had internal discussions about possibly extending WR DJ Chark, who is in line to be an unrestricted free agent in 2022. 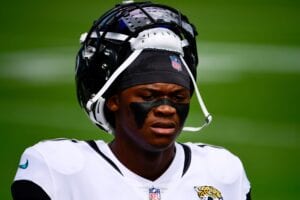 Jones mentions that Jacksonville was motivated to retain Chark due in part to the fact that they’ve had such little success retaining homegrown talent.

Chark is, unfortunately, out of the season after suffering a fractured ankle. Jones says that if the money is right and what his free agent market is like next year, it’s possible he could be back in Jacksonville.

Chark is in line to be an unrestricted free agent in 2022.

In 2021, Chark has appeared in four games for the Jaguars recording seven catches for 154 yards and two touchdowns.