Aaron Wilson reports that the Jacksonville Jaguars have had a conversation this week with retired quarterback Josh McCown this week. According to Wilson, McCown’s conversation with Jaguars GM Trent Baalke was just a talk and not regarded as a formal interview. 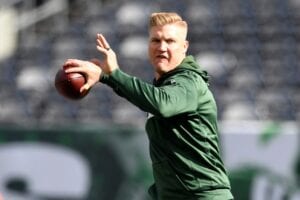 McCown just interviewed for the Texans’ head-coaching vacancy on Thursday.

Mike Florio reported earlier this morning that there’s “building chatter in league circles that the Texans want to hire McCown.”

For what it’s worth, Florio says the Texans believe they need another team to interview McCown to legitimize and normalize the notion of him going straight to head coach, despite not having coaching experience in college or the NFL.

McCown, 42, is a former third-round pick of the Cardinals back in 2002. He played for several teams including the Lions, Raiders, Dolphins, Panthers, 49ers, Bears, Buccaneers and Browns before signing a one-year, $6 million contract with the Jets as an unrestricted free agent in 2017.