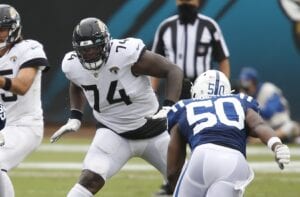 The tag for offensive linemen this year is expected to come in somewhere between $13.5 million and $14 million fully guaranteed after signing.

Jacksonville and Robinson now have until July 15 to negotiate a long-term deal, after which the two sides are locked into playing out the 2021 season.

Robinson, 25, is a former second-round pick of the Jaguars out of Alabama back in 2017. He just finished the final year of a four-year, $7,018,128 deal and was set to be an unrestricted free agent for the first time in his career.