Jaguars owner Shad Khan publicly threw his support behind HC Urban Meyer coming off the teams’ first win in London in Week 6, saying per Ian Rapoport he still “absolutely” has faith in his head coach. 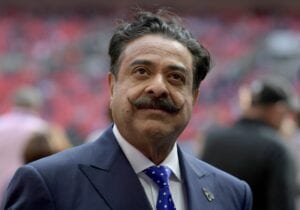 Sources reiterated in private to Rapoport as well that Khan is “all-in” on Meyer despite the rocky start to his tenure. He told Rapoport that the public perception of his team doesn’t match what he sees behind the scenes.

“I can see that being part of the team, versus picking up the paper and reading the media,” Khan said. “I mean, there are a lot of times and I’m not just talking about football, in business situations, what you read is so different from what the reality is and this was one of those cases. I wasn’t surprised, I believe in us.”

Meyer came under fire for being videoed dancing at a bar with a woman who was not his wife. In a statement released afterward, Khan said Meyer had to earn the team’s trust back. He expanded on the statement a little to Rapoport.

“I think this is NFL football,” Khan said. “You’re on stage all the time and you have to be absolutely self-aware. But I’ve gone over this so many times there’s very little to add.”

Another source of optimism for Khan has been the development of No. 1 overall QB Trevor Lawrence.

“He’s even better than what you think he is,” Khan said. “I really met him by Zoom before the draft when the season ended and we started (doing research). I got off the Zoom and it’s like, ‘He’s too good to be true.’ I’m not just talking about the athletic. I mean him as a human being when you look at the whole collective package. I really feel good about the Jaguars, and for the city of Jacksonville, we have a football player, a leader, a great human being in Trevor.”

So far, Meyer has a 1-5 record with the Jaguars.