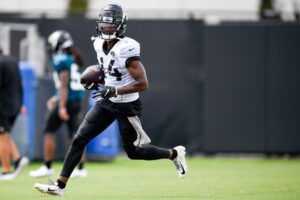 Godwin, 24, was originally a seventh-round pick by the Panthers in the 2019 NFL Draft out of Georgia. He signed a four-year, $2.6 million rookie contract but was among Carolina’s final roster cuts coming out of the preseason.

From there, Godwin signed on to the Jaguars’ practice squad and was on and off of the unit last year.

In 2020, Godwin appeared in three games for the Jaguars and caught three passes for 32 yards receiving and no touchdowns.

During his four-year college career, Godwin recorded 134 receptions for 1,800 yards receiving (13.4 YPC) and 11 touchdowns to go along with 11 rushing attempts for 51 yards (4.6 YPC) and one touchdown.