Jaguars RB Leonard Fournette has been the subject of trade rumors this offseason, but the draft came and went with the former No. 4 overall pick remaining in Jacksonville.

Jaguars GM Dave Caldwell tells Mike Florio of Pro Football Talk that there were “minor” trade talks involving Fournette, but they plan on him playing out the year as a member of their team.

“There were just some minor discussions with that but nothing substantial throughout the draft or prior to the draft,” Caldwell said. “I think the mindset is that we’re going to go forward with Leonard on the team. I had a good talk with him on Friday. I know Coach Marrone has had some discussion with him. He seems to be in great shape and mental frame of mind, and we feel that he’ll have a great season this year.”

Fournette previously said he would like to see the Jaguars sign QB Cam Newton. However, Caldwell believes his comments were taken out of context and there won’t be any issues with Gardner Minshew.

“I’m sure they’ll be on the same page they’re both professional guys, and I’m sure a lot of it was taken out of context from my understanding,” Caldwell said. “Gardner’s a tremendous leader and I think Leonard will do his best and put his best foot forward I don’t, to my knowledge, I don’t know what’s taken place but I’m sure it won’t be an issue.”

Fournette, 25, is a former first-round pick of the Jaguars back in 2017. He is entering the final year of his four-year, $27.15 million contract that’s fully guaranteed and stands to make a base salary of $4.16 million for the 2020 season.

The Jaguars recently declined Fournette’s fifth-year option, which means he’ll be an unrestricted free agent in 2021.

We’ll have more regarding Fournette as the news is available. 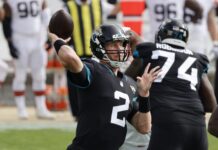 187,479FansLike
7,623FollowersFollow
275,556FollowersFollow
© NFLTradeRumors.co is an independent news source and has no affiliation with the National Football League (NFL), NFL.com, or any team(s).
wpDiscuz