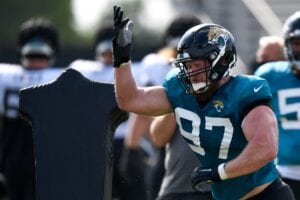 Mauro was suspended for the first five games of the season for violating the NFL’s policy on performance-enhancing substances.

The Jaguars received an exemption for him, but it appears as though they opted to move on instead of adding him to their roster.

Mauro, 29, originally signed on with the Steelers as an undrafted free agent out of Stanford back in 2014. He was later waived and re-signed to their practice squad at the start of the regular season.

In 2019, Mauro appeared in 13 games for the Raiders and recorded 19 tackles, no sacks and a pass defense.