The full list of tryouts for the Jaguars includes:

Jones, 28, is a former fourth-round pick by the Steelers in the 2013 NFL Draft. He finished out the final year of his four-year rookie contract and returned to Pittsburgh on a two-year contract last offseason.

However, the Steelers elected to release Jones coming out of the preseason and they trimmed their roster down to 53 players.

In 2017, Jones appeared in three games for the Steelers and recorded 23 completions on 28 attempts (82.1 percent) for 239 passing yards, one touchdown and one interception.

Wright, 28, is a former first-round pick of the Titans back in 2012. He played out his four-year, $8.218 million contract with the Titans before they elected to pick up his fifth-year option back in May of 2015.

Wright spent the 2017 season with the Bears before signing a one-year contract with the Vikings back in March. Unfortunately, the Vikings released him coming out of the preseason.

In 2017, Wright appeared in all 16 games for the Bears and caught 59 passes for 614 yards receiving and one touchdown. Pro Football Focus has him rated as the No. 40 receiver out of 116 qualifying players.

Sims, 27, is a former third-round pick of the Buccaneers back in 2014. He played out the final year of his four-year, $3.104 million contract before returning to the Buccaneers on a one-year contract this past April.

The Buccaneers placed Sims on injured reserve last month before cutting him loose with an injury settlement a few weeks later. 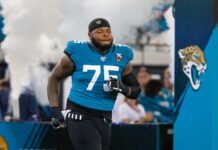