According to Aaron Wilson, the Jaguars worked out defensive tackles Cam Thomas, John Hughes and Ryan Carrethers on Tuesday.

Thomas, 30, is a former fifth-round pick of the Chargers back in 2010. After four years in San Diego, Thomas signed a two-year agreement with the Steelers in 2014 and later caught on with the Rams in June of last year.

Los Angeles elected to him loose as they cut their roster down to 53 players before bringing him back soon after. The Chiefs signed him to a contract back in June but he was among their final roster cuts coming out of the preseason.

In 2016, Thomas appeared in all 16 games for the Rams and recorded 15 tackles and a sack. Pro Football Focus had him rated as the No. 50 interior defender out of 127 qualifying players. 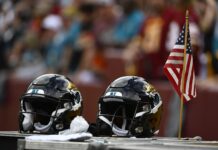