The New York Jets announced Friday that they’ve claimed RB Ty Johnson off of waivers from the Lions. 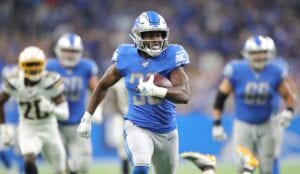 The Jets received a roster exemption for Johnson while he clears the COVID-19 protocol.

For his career, Johnson has appeared in 18 games for the Lions and rushed for 273 yards on 63 carries (4.3 YPC) to go along with 24 receptions for 109 yards receiving and no touchdowns.

186,384FansLike
7,623FollowersFollow
275,820FollowersFollow
© NFLTradeRumors.co is an independent news source and has no affiliation with the National Football League (NFL), NFL.com, or any team(s).
wpDiscuz