Mike Klis of 9 News reports that Jets passing game specialist Greg Knapp is hospitalized in critical condition after sustaining serious injuries from a bicycle accident over the weekend out in California. 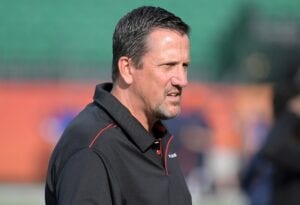 According to Klis, Knapp was riding his bicycle when struck by a car.

Knapp, 58, played seven years in the NFL as a quarterback for the Chiefs, Raiders and 49ers. He began his NFL coaching career in 1997 as the 49ers’ offensive quality control coach.

Knapp worked his way up to offensive coordinator in 2001 before departing and working for a number of teams including the Falcons, Raiders, and Seahawks. The Broncos hired him as their QBs coach in 2013 but the two parties eventually parted ways after four seasons.

From there, Knapp joined the Falcons as their quarterbacks coach in 2018 before the Jets hired him as their passing game specialist this past January.

Our thoughts are prayers are with Greg and hope he’s able to make a full recovery.