According to Albert Breer, the Jets have picked up the fifth-year option for DT Quinnen Williams. 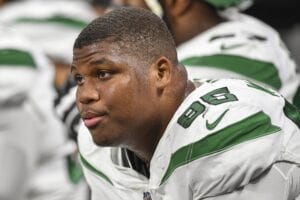 This was widely expected after the former No. 3 pick’s breakout season in 2021.

The fifth-year option for Williams is projected to be worth $11.5 million fully guaranteed for the 2023 season.

In 2021, Williams appeared in 15 games for the Jets and recorded 53 total tackles, seven tackles for loss, six sacks and three pass deflections. Pro Football Focus had him rated as the No. 37 interior defender out of 109 qualifying players.