The New York Jets have placed practice squad TE Ross Travis on the COVID-19 list on Thursday, according to Field Yates. 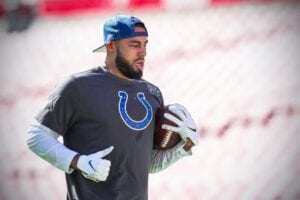 Travis, 27, wound up signing a three-year, $1.62 million contract with the Chiefs as an undrafted free agent out of Penn State back in 2015. He spent over four years in Kansas City before he was later claimed off of waivers by the Colts.

Unfortunately, Travis spent the 2018 season on injured reserve with a knee injury. He returned to Indianapolis on a one-year deal last year but was eventually cut loose towards the end of the season.

The Jets claimed Travis off waivers and he’s been on and off of their roster ever since.

In 2019, Travis appeared in three games for the Colts and caught four passes for 51 yards receiving and no touchdowns.

187,480FansLike
7,623FollowersFollow
275,495FollowersFollow
© NFLTradeRumors.co is an independent news source and has no affiliation with the National Football League (NFL), NFL.com, or any team(s).
wpDiscuz