The New York Jets have placed WR Denzel Mims on the COVID-19 list Tuesday, according to Mike Garafolo. 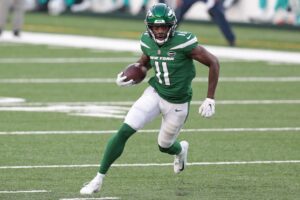 Mims was the subject of trade rumors leading up to the deadline. However, the Jets opted to old on to the former second-round pick.

In 2021, Mims has appeared in six games for the Jets and caught seven passes for 129 yards receiving and no touchdowns.