Rich Cimini of ESPN reports that the Jets are planning to put G Alex Lewis on the non-football injury list. 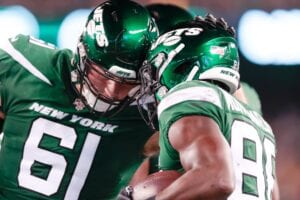 Ian Rapoport confirms the news and adds that Lewis is dealing with a non-football issue. He reportedly has the team’s blessing and will be paid while on the list.

The good news is that Lewis is hoping to be back when his situation is better.

This will cost Lewis a minimum of three weeks before he could be activated from the list.

The circumstance involving Lewis’ status with the team has been a mystery.

Jets HC Adam Gase told reporters on Friday that Lewis will not play in Week 13 and has missed practice for issues that are not injury related.

“There has not been any resolution to this yet,” Gase said, per Ralph Vacchiano.

The Jets re-signed Lewis to a three-year, $18.6 million deal this past March.

In 2020, Lewis has appeared in nine games for the Jets, making nine starts for them at guard.

190,431FansLike
7,623FollowersFollow
275,136FollowersFollow
© NFLTradeRumors.co is an independent news source and has no affiliation with the National Football League (NFL), NFL.com, or any team(s).
wpDiscuz
You are going to send email to
Move Comment