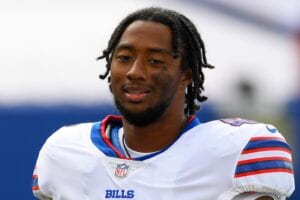 Phillips, 24, wound up going undrafted out of Illinois back in 2019. He later signed a rookie contract with the Falcons, but was waived coming out of the preseason.

From there, Phillips signed on to the Bills’ practice squad and returned to Buffalo on a futures contract last year.

The Bills opted to waive Philips from injured reserve this past January.

In 2020, Phillips was active for two games, but did not record a tackle.