According to Field Yates, the Jets are waiving DE Vinny Curry from the non-football illness list on Friday. 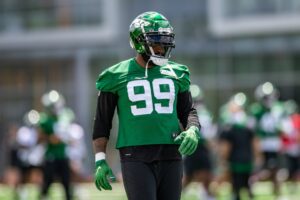 While Curry’s blood disorder prevented him from playing this season, he expects to make a full recovery and play in 2022.

The Buccaneers later signed Curry to a three-year deal for up to $27 million in 2018 but he was cut loose after one season. He signed a one-year, $2.25 deal with Philadelphia in 2019 and re-signed on another one-year deal last August.

Curry signed on with the Jets this past March but has missed the entire season on the NFI list.

In 2020, Curry appeared in 11 games and recorded 16 total tackles, three tackles for loss, three sacks and one fumble recovery.