Lindsey Thiry confirms the news and adds that Barry will still have the associate head coach title.

Barry, 49, began his NFL coaching career with the 49ers back in 2000 as their quality control coordinator. Later caught on with the Buccaneers and served as their linebackers coach before he was hired to be the Lions’ defensive coordinator in 2007.

Barry returned to Tampa Bay for one season before he was hired by the Chargers as their linebackers coach. After four years in San Diego, Barry landed the Redskins’ defensive coordinator job but was unfortunately fired back in 2017.

The Rams later signed Barry as their assistant HC/LBs coach. 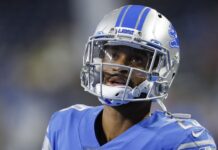