ESPN’s Adam Schefter reports that Chiefs Patrick Mahomes cleared “some big steps” on Monday, but remains in the NFL’s concussion protocol with what is considered a concussion. 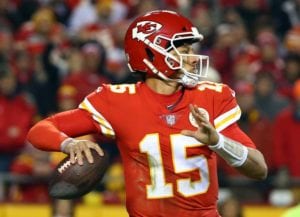 According to Schefter, it’s too early to say definitely that Mahomes will play in the AFC Championship game against the Bills.

Schefter adds that Mahomes is also dealing with a foot issue.

The plan from here is that Mahomes will need to go through certain steps to clear concussion protocol in the coming days. Schefter says there is hope and optimism regarding Mahomes, who is expected to practice Wednesday.

However, Mahomes agreed to a 10-year extension with the Chiefs is worth $503 million a few months later.

We’ll have more regarding Mahomes as the news is available.