Giants WR Kadarius Toney played just seven snaps in Week 1, but the team is impressed with the maturity he showed in handling the situation, per Jonathan Jones. 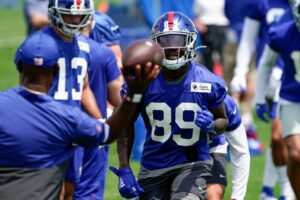 Toney was queried extensively about the situation this week and he hit all of the right notes in his response.

“KT last year would have responded differently to what happened Sunday,” one Giants source who has been in the building for each of Toney‘s two seasons told Jones.

Jones adds the Giants are holding Toney out right now because he’s missed a ton of practice time, largely with a bothersome hamstring injury.

“New culture and he missed significant time in camp and during the spring,” another team source said. “Not going to roll guys out there that haven’t practiced. He’s doing all the right things.”

Per Jones, the team has been happy with how Toney has responded. Although he missed practice time again with a hamstring injury this week, he’s set to play against the Panthers in Week 2.

“He understands (his lack of snaps). Does that mean he likes it? Of course not, but he respects the process because it’s consistent with everyone,” a source said. “This isn’t some singular thing that Dabs is doing with just him. He’s just the most notable guy.”

The former first-round receiver came up in trade talks this offseason, but nothing ever came of it and things quieted down over the summer.

Despite the reduced role, the Giants don’t seem to be souring on Toney from what Jones’ conversations indicate.

“He’s way more talkative in the locker room than he was last year,” one source told him. “He’s a great guy, but you have to earn his trust. Once you do that, you’re good.”

The Giants will have a fifth-year option to pick up on him in 2024.

We’ll have more on the Giants and Toney as the news is available.