Veteran NFL RB Todd Gurley said in a radio interview this week that he didn’t miss being out on the field while watching his former team, the Rams, make a run to a Super Bowl championship. 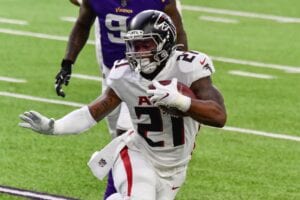 “There was never not one time where I watched a game and was like, ‘I wish I was out there,’” Gurley said via NBC LX. “I appreciated my time in the league and I’ve done things I could have never even dreamed about.”

Gurley sat out the entire 2021 season as a free agent. He had some level of interest from the Lions and Ravens, taking visits to both teams last year, but ultimately declined to sign.

While Gurley hasn’t officially announced his retirement, speaking about his career in the past tense seems like a big clue he’s not thinking about a return.

It’s also worth mentioning Gurley’s injury history, specifically his knees, which required increasing levels of maintenance his past couple of seasons.

Gurley didn’t completely rule out returning to play but it sounded like returning to the grind of the NFL was a remote consideration compared to his current lifestyle.

“I like doing whatever I want to do,” he mentioned.

Gurley, 27, is a former first-round pick of the Rams back in 2015. He was entering the final year of his four-year, $13.823 million contract and stood to make a base salary of $2.31 million for the 2018 season when the Rams picked up his fifth-year option.

Los Angeles released him in 2020 and the Falcons quickly scooped up Gurley with a one-year, $6 million deal.